Freshman here at Csulb, he is marketing major he knows he wants to be in business and like the creativity of the open side of making money, originally from north ridge California and literally grew up 2 miles away from north ridge
He said he didn’t want to go to that campus because it’ll only be a high school reunion. Likes Csulb because he gets to get away from the valley
Swims for fun and has no time to swim
He studies now and just has no time at all for swim
Class of 2014 in Granada hills charter high school
18 years old and likes the 49ers and lions
Trained for stuntman and plays baseball and basketball and martial arts. 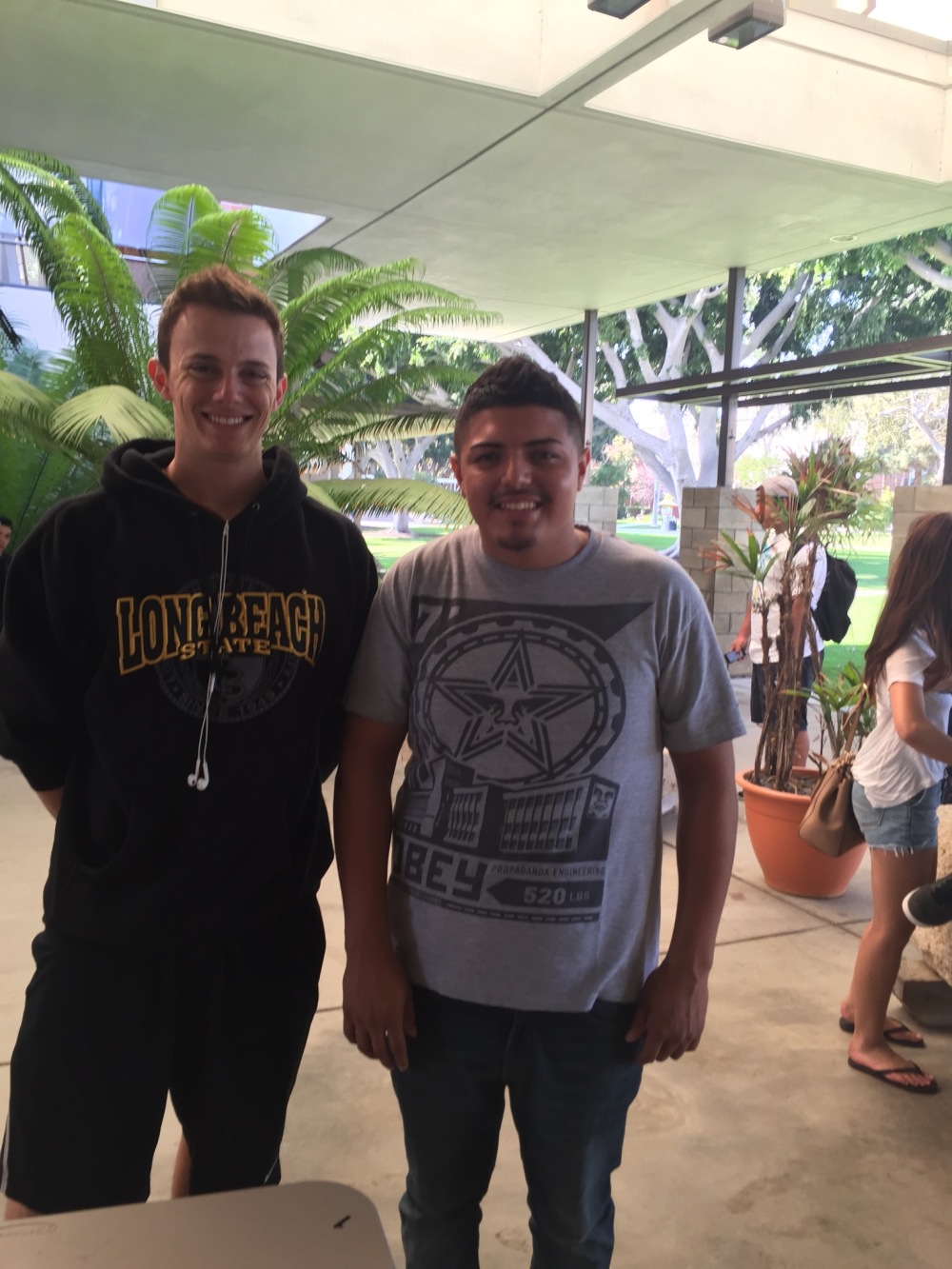 My friend is a sophomore here at cal state long beach he is considered undeclared as well and was class of 2013 in Wilson high school. he’s probably going to go with business major and he enjoys math and has tried multiple majors but can’t decide which one yet. his hobbies are soccer and started snowboarding recently and enjoys he says he just got a pass to big bear thinks he will enjoy going to big bear every friday. He is quarter french and goes to france every there years he said he has a house in the town. he works at papa john pizzas as a delivery boy. and recently moved into an apartment. 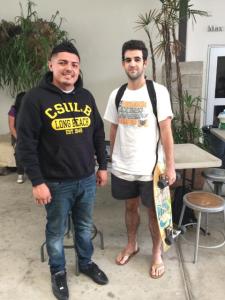 The art i liked the most was the drain looking thing. it was pretty creative and it was real artsy i liked this weeks art museum it was out of the ordinary and i enjoyed being there.

the artist that interested me was Kenita Hale sculpture exhibit. It was mad crazy it felt like i was in a haunted circus and that at any moment it was going to start spinning with clowns inside and it was crazy but it was similar to a cemetery from my eyes. The circus theme was crazy and the entire thing was based on old circus performers as well on every tomb there were ares with information about the performer. 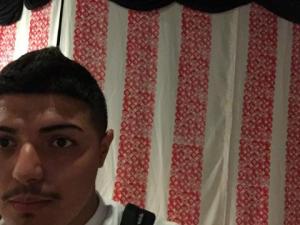 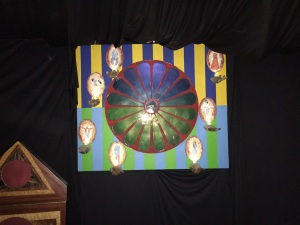 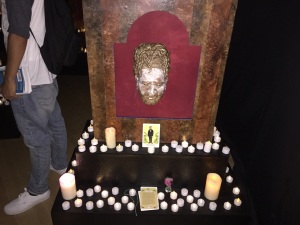 I went out to venice on my day off and i was with my girlfriend and it was awesome i would love to do that again we had so much fun form begging to end we had laughs and enjoyed painting the walls of venice and other artists where giving me tips and what not and i was like sorry guys I’m not a professional. even though it took me one hour and a half to get there but every second was worth it i bought paint and had a blast. i wish i had more paint and more power in my fingers because it was tire in to be holding the paint down. 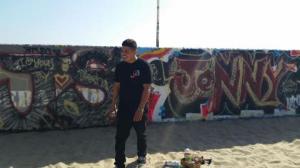 to the rite i wrote my name and to the left i made a little thing for me and my girlfriend of our initials. 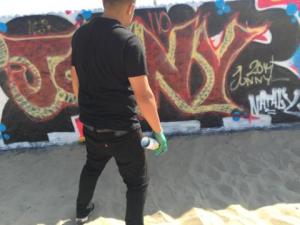 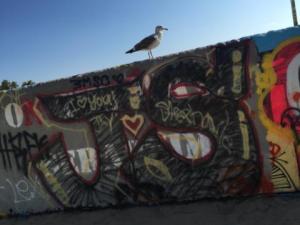 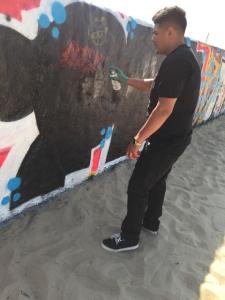 The drawing of our names was pretty fun it was like actually getting in to the mood of buying paint and going out in to the streets to paint the walls and make a beautiful painting on the nearest wall just to get your name out there. i use to do graffiti when i was really small and i loved the adrenaline rush that i used to get of painting walls and to get your name out there everywhere you go and people would tell you hey i saw you here and saw you there it was pretty cool. 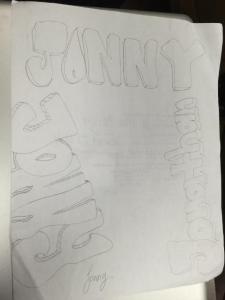 His ceramic pieces of glass where amazing they were so well done and it looked stunning i think one of the favorite pieces with the one with all the plates that looked wet. He told us that he did a bunch of test runs while doing his art and said that they were really expensive and some where fairly cheap or economical. one of the places i liked where the pieces that he said you could hold as well it was pretty awesome 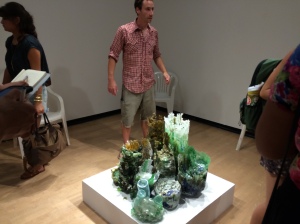 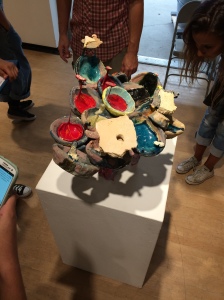 Christian Espinoza is a freshman here and he enjoys his first year here at the beach. he has in totals with all go his classes he is taking 13 units and he says that it aint to stressful here and that he thinks its pretty easy. He is originally from wilmington CA and moved to Harbor City and he graduated from Narbonne High School. he is a English pedorick major. He tells me that he doesn’t know exactly it is he could do with that major but he is curious about it and so he is pursuing it. Some of his hobbies are to pal guitar/music. he enjoys drawing dragon ball z characters and he tells me that it came from family members in the family. he has 3 tattoo artists in the family that love to draw and make art. he works in an elementary school next to house and says he loves helping and teaching kids.

What he thought of the Art was that he says it that it is eccentric and thought that he enjoyed watching the art of the wooden goat and says that it was really realistic. 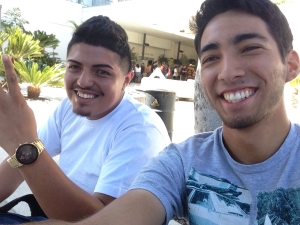 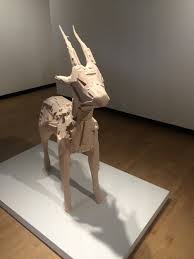 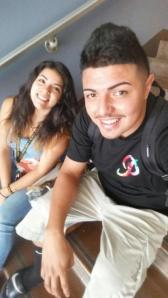 The swag me. i asked a new friend a couple questions about me she told me that i looked like a person who cares to much about my appearance and that she thought i was cute but that i looked like a person that would never talk to her because she thinks that she is ugly herself. She said that she could picture my name as a jake or jacob. she at least got the first letter correct. She guest correct and told me that she thought that my major was undeclared and that i looked confused about what i wanted to do about my major. She was just kind of shy at first and after she even asked me for my number and that we should keep in touch she acted pretty normal but just a little uptight. but the experience was overall nothing to different but it was cool i met a new friend and it was fun,

Ricky is a freshman here at the beach and he is considered undeclared major one of his major hobbies is he enjoys working on his 240 sx(car). he is preparing his car for drift season  he graduated from warren high school in downey ca the year of 2014. he is barely 18 years old and his isn’t employed he told me that school is hard enough for him

The picture was token by ricky and he never sent me it so i have difficulties posting a pic of us two.

the art work the same. the only thing ricky told me about the crystals was that he enjoyed seeing them and he thought that most of the crystals looked melted.

Si_Jayy
Create a free website or blog at WordPress.com.